Attorneys Specializing in Gay, Same-Sex Marriage and Immigration in Florida 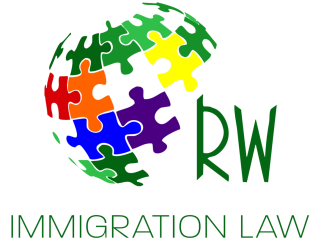 Sasha Westerman-Keuning is considered a national expert in the field of LGBTQ immigration law.  A prominent LGBTQ activist since college, Sasha has been leading the fight for equality for more than a decade.

She served as the Chair of the LGBTQ Affairs Comitteee for the South Florida Chapter of American Immigration Lawyers for the 2017-2018 year (she also served as the Co-Chair during the 2016-2017 year).   She continues to be a member fo the LGBTQ Affairs Committee for AILA and was invited to speak as a national expert in LGBTQ immigration law at the 2020 Annual National Conference for the American Immigration Lawyers Association.  While chairing the LGBTQ Affairs Committee, she created a local pro bono project to obtain quality immigration legal representation for homeless and at-risk homeless LGBTQ youth throughout South Florida.  Through her pro bono project, she and other volunteer attorneys filed asylum (and other humanitarian cases) for LGBTQ youth from Saudi Arabia, the Bahamas, Colombia whose lives were in danger in their home countries. She travels all over the country representing LGBTQ clients before USCIS and the immigration courts.  She has repeatedly been selected as a speaker for national conferences, providing Continuing Legal Education (CLE) to other attorneys on the topic of LGBTQ immigration.  She has also authored several published articles regarding LGBTQ immigration.  Due to her reputation as one of the nation's leading attorneys in same-sex marriage green card cases, she has been invited by the Department of Homeland Security to give presentations to USCIS officers regarding sensitivity issues in adjudicating same-sex marriage petitions.

Sasha is known throughout the country for handling even the toughest immigration matters.  She has earned a reputation for winning LGBTQ cases with complex case histories and complications.  She has successfully handled immigration matters with the following types of issues which can frequently arise in cases involving members of the LGBTQ community:

Mrs. Westerman-Keuning has advocated tirelessly on behalf of the LGBTQ community for more than 10 years. She strongly believes that LGBTQ rights are human rights and that gay, lesbian, and transgendered individuals are entitled to equal treatment under the law and respect and acceptance within their communities.  She works everyday to inspire those beliefs in others.  She works closely with same-sex couples throughout Florida in gay marriage immigration cases.  She has successfully obtained numerous green cards (permanent residency) and K-1 fiance visa approvals on behalf of gay and lesbian couples and has represented hundreds of same-sex couples since the repeal of DOMA in 2013.  Mrs. Westerman-Keuning represented the first same-sex fiance visa applicants who were interviewed and approved at the U.S. Consulates in Amman, Jordan and Bogota, Colombia.

A sampling of our office's accomplishments in the field of LGBT immigration:

During her time as a student at Boston College ("BC"), Mrs. Westerman-Keuning became a powerful gay rights activist, leading a rally of more than 1,000 BC students and faculty in opposition to the university's discriminatory policies towards the LGBTQ community.  She was elected the Vice-President of the GLBT Leadership Council and represented the rights of LGBTQ students in meetings with Boston College deans and administrators. Her time at Boston College fighting against the university's discriminatory practices solidified her commitment to fighting for gay and lesbian rights.  She has represented several gay, lesbian and bisexual individuals in asylum claims before the Immigration Court.

More recently, she has participated as a speaker in workshops sponsored by Unity Coalition such as "International Love and the Law" series, alongside distinguished panelists such as U.S. Congresswoman Debbie Wasserman-Schultz and Former Judge David Young.  These panels focused on the negative impact of the Defense of Marriage Act ("DOMA") in the immigration arena and the positive changes seen in the field of LGBTQ rights in recent months and years. She works closely with the non-profit group Unity Coalition, the largest LGBT Hispanic organization in Florida.  She walked in the 2014 and 2015 Miami Beach Gay Pride Parade and the Miami AIDS Walk, benefiting CARE Resources.  She has also served as a Board Member of the non-profit LGBT rights group, Unity Coalition/Coalicion Unida for five years.

In 2015, Mrs. Westerman-Keuning established a unique pro bono project on behalf of the local chapter of the American Immigration Lawyers Association (AILA).  This project called the LGBTQ Undocumented Homeless Youth Initiative pairs qualified immigration lawyers with homeless or at-risk for homelessness LGBTQ youth who need representation before U.S. immigration agencies.  The project is a collaboration between the local South Florida AILA Chapter and several local LGBT non-profit organizations such as Unity Coalition, Project SAFE, the Alliance for LGBT Youth, and Pridelines, among others.

Did you know that 40% of South Florida’s population of homeless youth identify as LGBTQ?  Across the country, LGBTQ youth are disproportionately subjected to abuse, homelessness, violence and harassment than their heterosexual counterparts. Undocumented LGBTQ youth are especially vulnerable to homelessness and street violence in the United States.   Due to the strongly held cultural, religious and societal beliefs brought to this country by their parents, undocumented LGBTQ youth too often find themselves subjected to abuse and thrown out into the streets when they “come out of the closet” to their families.  With no lawful immigration status and a smaller safety net of family and community resources in the U.S. than native-born citizens, these teens and young adults find themselves living life on the street with little hope. This project gives these youth hope by providing free legal services to this vulnerable population.  Our law firm is very proud of the creation and implementation of this important pro bono service.

On June 26, 2013, the United States Supreme Court ruled that section 3 of the Defense of Marriage Act (“DOMA”) is unconstitutional as a violation of the constitutional guarantees of equal protection and due process. See United States v. Windsor, 133 S. Ct. 2675, 2695-96 (2013).   On July 17, 2013, the Board of Immigration Appeals acknowledged the Supreme Court’s holding in Windsor as binding in the immigration context permitting same-sex couples to have the same rights as opposite-sex couples in all immigration matters.  Matter of Zeleniak, 26 I&N Dec. 158 (BIA 2013).

It is an exciting and historic time for gay and lesbian couples who are now for the first time recognized as spouses under federal immigration law and may file petitions on behalf of their spouses and fiance(e)s and act as qualifying relatives for immigration waivers.  Mrs. Westerman-Keuning currently represents hundreds of gay and lesbian couples in the residency process before USCIS and in K-1 fiance visa petitions before the U.S. Consulates.  She has also successfully represented transgendered individuals in immigration marriage proceedings.  Mrs. Westerman-Keuning continues to fight for LGBTQ and immigrant rights in all arenas. 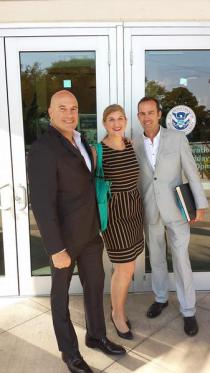 Sasha outside of the USCIS Oakland Park Field Office with her clients' Allen and Jean-Francois after the approval of Jean-Francois' green card application.  Allen, a native-born U.S. citizen, met his husband Jean-Francois, a French citizen in 1995.  The couple lived in the Los Angeles area for nearly a decade while Jean-Francois worked in the United States as a journalist on an I visa.  After Jean-Francois could not renew his I visa in 2005, Allen made the difficult decision to leave his family and his home country and move to a French territory with his longtime love so that the two could remain together.  Allen lived in exile in the French West Indies for nearly 8 years writing to every U.S. Congressman and Senator who would listen to his story about the unfair discrimination present in our immigration laws due to DOMA.  In 2011, the couple traveled to Boston, Massachusetts to get married.  After the fall of DOMA in June 2013, the couple were finally able to plan their return to the United States.  Jean-Francois entered the U.S. in October 2013 as a tourist and subsquently adjusted his status to lawful permanent resident.  His case was filed in January 2014 and approved only three months later in April 2014.  It has been such an honor and pleasure to help Jean-Francois obtain his green card after being coupled with a U.S. citizen for the past 19 years.  Our law office continues to fight everyday to reverse the wrongs caused by the institutionalized discrimination of DOMA.

WANT TO JOIN THE PARTY?  CALL OUR OFFICE TODAY! 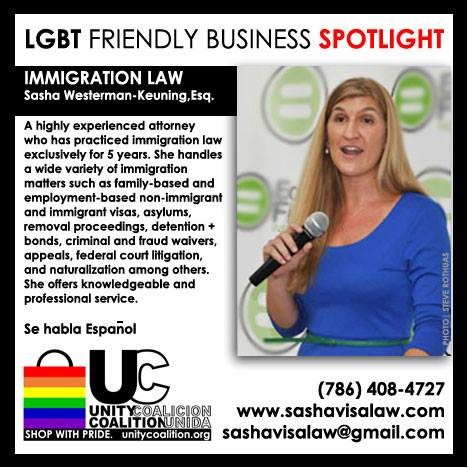 I AM A PROUD BOARD MEMBER OF UNITY COALITION.