Our firm is known for providing exceptional legal service.  Read below about a sampling of our successful results.

Our law office represents dozens of same-sex couples in their immigration proceedings.  Since the repeal of DOMA on June 26, 2013, our office has obtained lawful permanent resident cards for hundreds of individuals based on their same-sex marriages in the Oakland Park, Florida field office alone.   We have represented approximately 200+ same-sex couples in applying for marriage-based green cards or fiance visas in the past year.   We have successfully obtained approvals of green cards for same-sex couples at the following USCIS field offices:  Miami, Florida; Oakland Park, Florida; Hialeah, Florida; Kendall, Florida; West Palm Beach, Florida; Chicago, Illinois; Manchester, New Hampshire; Greer, South Carolina; New York, New York; and Boston, Massachusetts with pending interviews at field offices throughout the country.

In addition, our office has already obtained the approval of 10 same-sex K-1 fiance visa petitions in the recent months.  The first three cases were approved in less than 2 months from the date of filing and we even obtained an approval for one couple who had a 37 year age gap without any questions asked!

In January 2014, our client was the first same-sex fiance visa applicant interviewed at the U.S. Embassy in Amman, Jordan.  He was interviewed directly by the Chief Consul who was so happy to have Jordan's first same-sex case.   The Consulate also provided him with a private room to protect his identity.

In February 2014, our office represented the first same-sex fiance visa applicant approved at the U.S. Embassy in Bogota, Colombia.

In October 2014, we overturned the decision of the U.S. Consulate in Caracas to deny the issuance of a K-1 fiance visa for a gay couple because they had not met in person during the past 2 years.  Our office was able to get the Consulate to agree that no waiver was necessary because the U.S. Petitioner had documented his significant medical condition which prevented him from traveling to see his partner in Venezuela.

In September 2014, we received the approval an I-130 marriage petition for a beneficiary living abroad in only TWO WEEKS without submitting any type of expedite request.

In April 2015, our first client returned home after the approval of his I-130 marriage petition and I-601A Provisional Waiver and successfully obtained his immigrant visa to return to the U.S. without any issues.   Since then, we have successfully represented same-sex couples processing for I-601A waivers in the following countries:  Mexico, El Salvador, Peru, and Colombia.

In February 2014, our office obtained the approval of a waiver of fraud/misrepresentation for a Chinese national in conjunction with his marriage-based residency.  The applicant entered the United States using his cousin's refugee travel document.  We were able to waive the fraudulent entry by evidencing extreme hardship to his U.S. citizen wife and daughter.

Our office continues to maintain our 100% success rate on I-601A provisional waivers for those waiving their illegal entry into the U.S.  We have obtained  the approval of I-601A waivers for individuals from the following countries:  Mexico, El Salvador, Honduras, Guatemala, Peru, Venezuela, Brazil, and Colombia.

Our law office recently obtained an Order of Administrative Closure, closing the deportation proceedings for a Chinese national who had previously had her asylum case denied.  Our client had been in removal proceedings for nearly 6 years before we obtained the closure on her behalf.  Now, she will file a provisional waiver based on her approved marriage petition.

We represented a long-time permanent resident from Colombia who was detained at the Krome Detention Center after being convicted on drug distribution charges.  After presenting a case for Cancellation of Removal, the Immigration Judge granted our application for cancellation of removal allowing our client to keep his green card and remain in the United States.

Update:  We recently obtained the consent of the Miami Office of Chief Counsel to join in a motion to reopen the above-referenced individuals deportation case so that he may apply for his green card as the parent of an adult U.S. citizen.

Our office received the approval of a petition filed under the Violence Against Women Act for a Venezuelan national.  Our client had married a U.S. soldier several years ago and suffered substantial abuse at his hands. Upon his return from Afghanistan, our client's husband suffered severe PTSD and inappropriately took out his anger on his wife.   With the approval of the VAWA petition, our client no longer has to live in fear and will be able to obtain her U.S. residency.

Our office recently obtained citizenship on behalf of our longtime clients, T and L.   T was placed in removal proceedings in 2010 where he won his case after the government accused of falsely claiming to be a U.S. citizen when he registered to vote.  We are proud to say that 5 years later, T is a United States citizen and will be voting in next year's election!   L, a long time permanent resident, was placed in deportation proceedings several years ago where we won a 212(c) criminal waiver on his behalf.  After being stopped in the airport every time he traveled even though he won his deportation case, L finally has become a U.S. citizen and took his first trip with his U.S. passport.  We are so happy to have been with our clients through every step of these trying journeys.

We recently received the approvals of E-2 visas in Toronto and Argentina on behalf of our business clients.

Recently, we have obtained O-1 extraordinary ability visas for two DJs who have international recognition in the LGBT market.  Additionally, we obtained an O-1 visa for a Russian director even with a negative advisory opinion letter!  Congrats to these great artists!

Our petition for an extraordinary ability green card was approved in just 7 days for the famed Venezuelan fashion designer, Maria Moschiano.  Moschiano will now bring her couture line of beautiful designs to the U.S.

Law Partners, Irina Rostova and Sasha Westerman-Keuning, filed and supervised the preparation of hundreds of I-526 and I-829 investor visa green card petitions for the Florida Overseas Regional Center, one of the prominent EB-5 regional centers in the United States, as the preferred lawyers of this regional center.

***Please note that every case presents unique circumstances and the results of an individual's case may vary from the above cases.  Results may vary depending on the facts involved any particular case.  The results reported on this website should not be construed as a predictor of future results or as a guarantee for a particular outcome on a case. 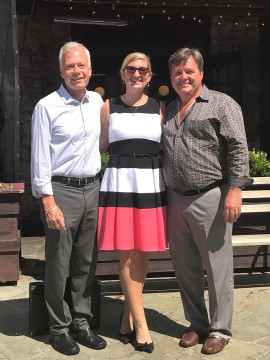 Sasha traveled to South Carolina to attend a green card interview with this happy couple of 30+ years.  Wayne and Bryan, both Canadians by birth, had been traveling in and out of the U.S. for the past two decades to maintain lawful immigration status.  Our office not only assisted Wayne in becoming a U.S. citizen just in time to vote in the 2016 elections, we got Bryan his marriage-based green card a few months later.  Congratulations to these two wonderful gentlemen! 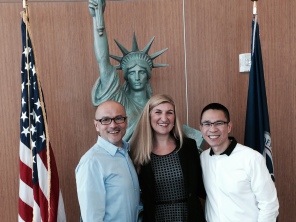 Congrats to Demetrio and Bernard!

Sasha with her clients Bernard and Demetrio after Bernard's green card approval at the Miami Field Office. Together since 1999, Bernard and Demetrio lived in London as a couple for nearly 15 years before immigrating to the U.S. after the repeal of DOMA.  We are so happy that the couple can finally live here in the U.S. and have their marriage recognized by both the federal government and the Florida state government. Congrats to the happy couple!! 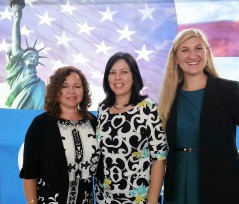 Our firm is so happy for the green card approval for this wonderful couple, Annette and Cecilia. Together since 1996, we were finally able to obtain green card status for this deserving pair at the Orlando Field Office.  Congrats, ladies!

In the words of our clients: 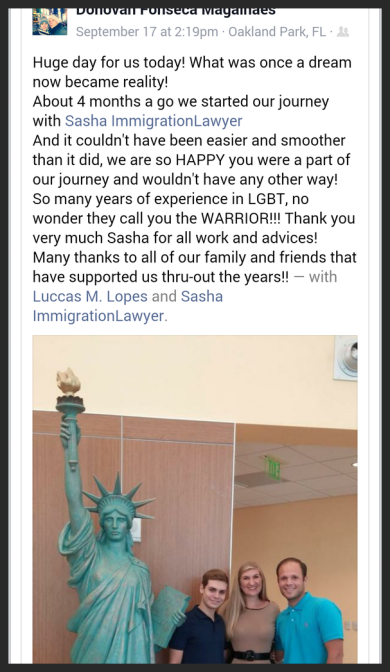 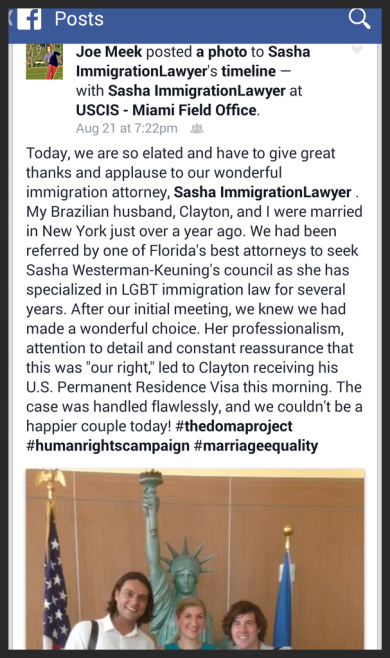 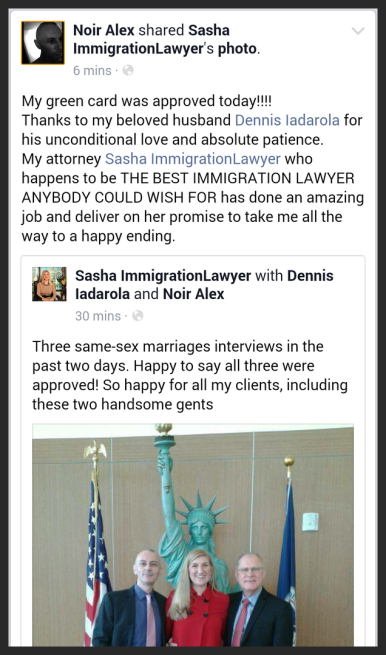 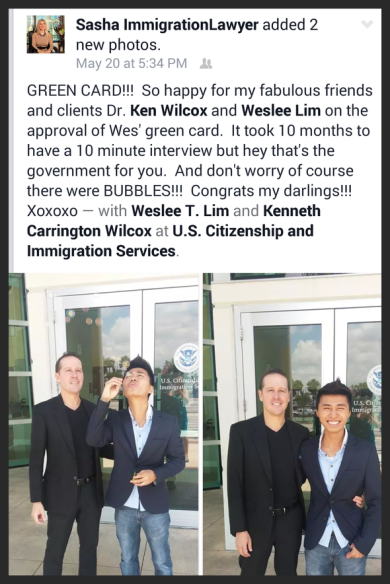 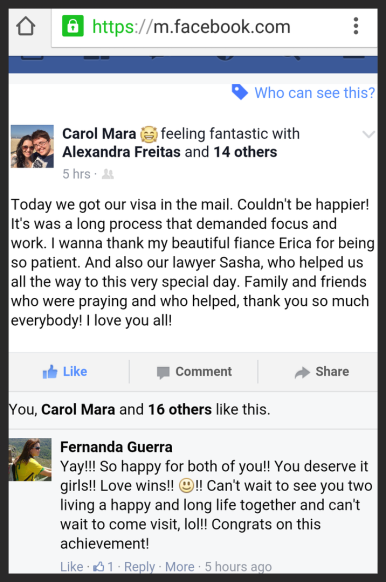 Approval of a same-sex fiancee visa at the U.S. Consulate in Rio de Janeiro, Brazil! 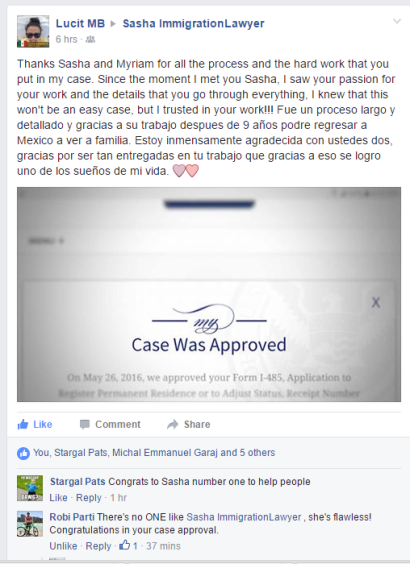 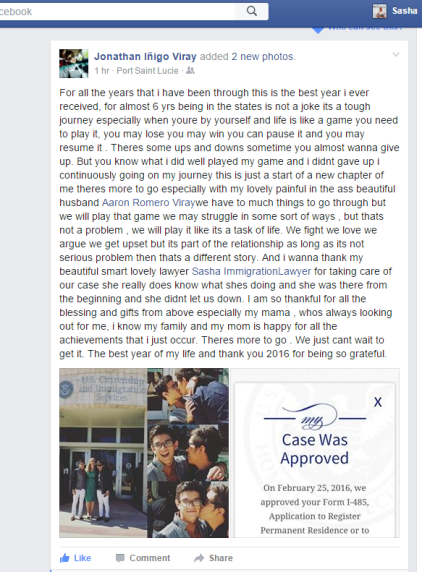 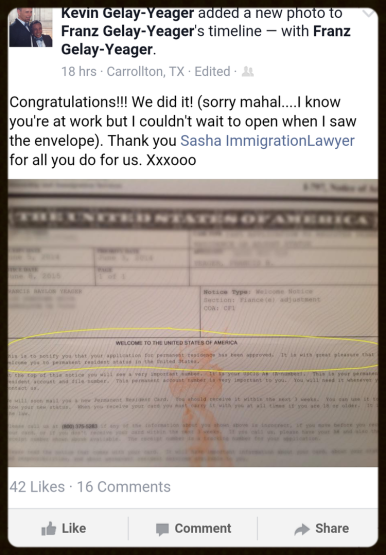 Kat's I-130 marriage petition was approved by USCIS in only two weeks! 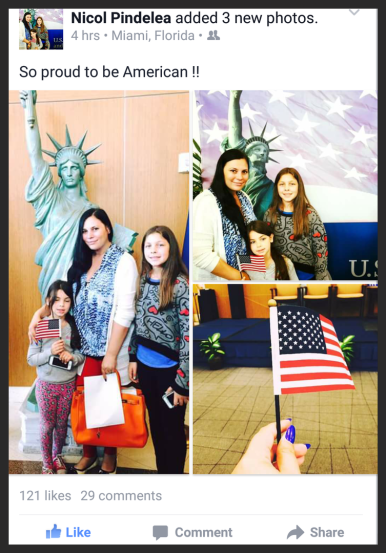 Congratulations to my wonderful client and friend, Nicol, on her recent U.S. citizenship! 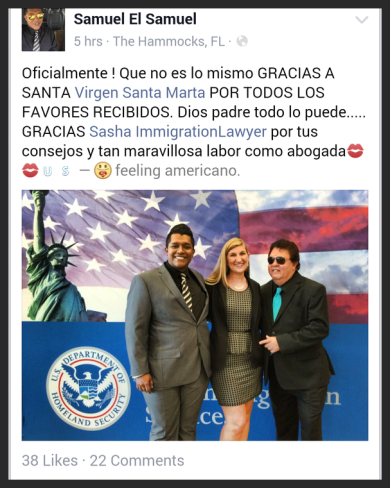 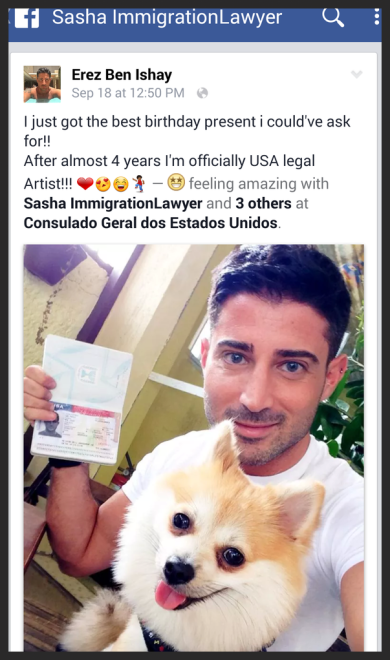 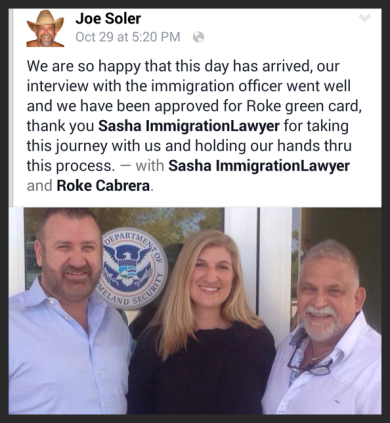 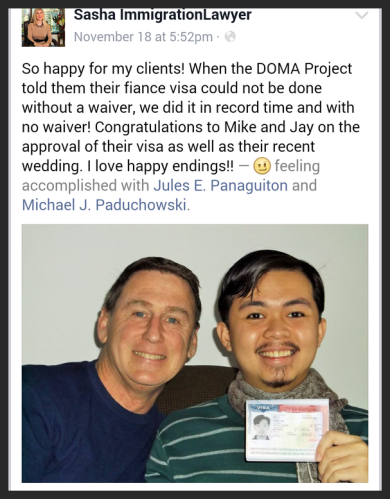 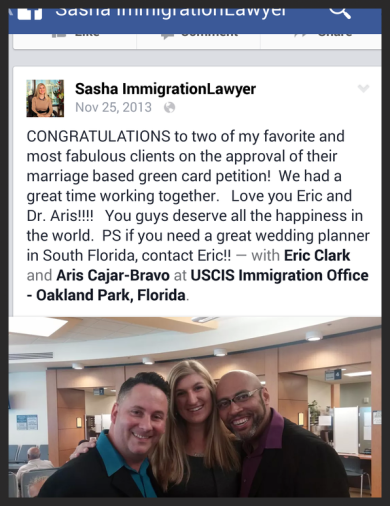 Want to see your success story here?  Contact us today

***Each case is very fact-specific and requires a consultation with a qualified immigration lawyer.   Results may vary from the stories printed above.